I experiment with different flavors of hummus, since I usually eat it for lunch with vegetables like broccoli, cauliflower, carrots and the occasional pita chips or veggie straws.  In the past I have made hummus with avocado and roasted red peppers.  Other times I used a can of artichokes hearts.  The only two that need cooking before combining all the ingredients are the eggplant and the red peppers.  I roast the red peppers the way I roast the eggplant.   You don't even have to peel the skin once the peppers are roasted.  It will  blend in with the rest of the ingredients in the food processor.  As for the avocado, I only use one.  The same with the canned artichoke hearts.  I make sure I drain them before I put them in the food processor.  Enjoy!

For the roasted eggplant

Wash the eggplant.  Cut it in cubes and toss it with olive oil and salt and pepper.  Spread it in a cookie sheet lined with wax paper.  Roast at 400°F oven for half hour.  Remove from the oven.

In a food processor add the chick peas, garlic, tahini and roasted eggplant.  Blend till smooth adding the olive oil, lemon juice, salt and pepper to taste and the juice from the chick peas.  Blend well till smooth.  Refrigerate till ready to use. 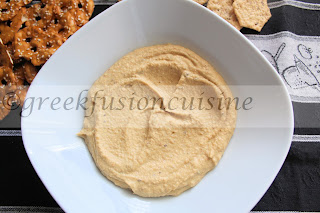 Who said you can't use any left over Halloween candy to start your Christmas baking?  Well, I thought so, but then I thought why not?  I have the chocolate candy and what stops me from using them into my cookies.  I also wanted to use m&m's candy but I didn't have enough.  So here it is Oatmeal cookies with mini peanut butter cups.  Enjoy!

Preheat oven to 325°F.  Soften the butter in the microwave for 30 seconds or leave at room temperature for a couple of hours.  In a bowl beat together the softened butter with the sifted icing sugar.  Add the flour, baking soda, vanilla and the quick cooking oats.  Beat well.  Add the Reese's pieces peanut butter cups after you cut them in half.  Fold them into the dough.

Take a tablespoon of the dough and roll it into your palms into a ball. Place them in a cookie sheet lined with wax paper about two inches apart.  Flatten them with a fork.  The cookies will spread in the oven.  Bake them in the preheated oven for 20-25 minutes till lightly browned.  Remove from the oven and enjoy. 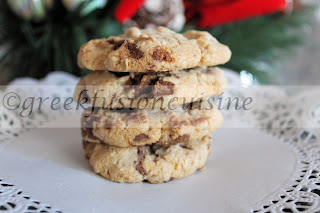 Stuffed peppers and tomatoes is a very traditional and popular summer dish in Greece while the vegetables are in season. This is also one of my favorite Greek dishes. The tomatoes are medium size, firm, ripe and juicy. The peppers are small and so tender that you don’t need to peel the skin when cooked. I have experimented with different type of peppers. There are only two types that can be stuffed; bell peppers and cubanelle peppers. Cubanelle peppers have thinner skin than the regular bell peppers. I find them the closest to the peppers I find in Greece.

My mother used to make mainly peppers and tomatoes, but the peppers were the only ones I would eat. Sometimes she’d stuff eggplants too. The eggplants in Greece are also small; what we call here in the US baby eggplant. When my mother made this dish during the summer, she made it mainly vegetarian. On occasion she’d use ground beef. The vegetarian version is with rice and different vegetables. When I make the vegetarian version, I use chopped carrots, and if I stuff zucchini or eggplant, I will incorporate the flesh in the stuffing along with herbs like parsley and dill.

There are many different versions of gemista – or yemista. My mother in law used raisins and pine nuts in the vegetarian version. The raisins give them a sweeter taste and the pine nuts some crunch.

I often make this delectable stuffed peppers, tomatoes and eggplant dish. Living in the US we can find these vegetables year round, (they are being shipped here from warmer climates). Sometimes I will make them vegetarian style, and other times I will use ground turkey. I usually make enough so that I can give some to my daughters. They also freeze well, especially the peppers. Tomatoes, eggplant and zucchini are best eaten first if you are planning in freezing some. You can place the uncooked stuffed peppers in a separate dish, cover them tightly with saran wrap and aluminum foil and freeze them. When you need them you can take them out, pour some olive oil, a little bit of tomato sauce, season and bake them in the oven. They will taste as good as the day you made them. Another option is to cook all of them, and freeze the stuffed peppers in an airtight container. When you need them, you can take them out of the freezer early in the morning, then warm them up in the oven for about ½ hour till heated through. Now you have dinner ready in minutes.

These will take an hour to prepare and about two hours to cook in the oven. But it’s worth all the effort. Enjoy them with a dollop of Greek yogurt, a slice of feta and some fresh crusty bread on the side. A glass of red wine will also go nicely.

Makes 13 servings about 15 oz each serving

In a large skillet add the 1/2 cup olive oil, and the chopped onions. Sauté till lightly browned. Add the ground turkey. Sauté till cooked through. Add the carrots and the flesh from the eggplant and sauté. Add 1 cup of the diced tomato flesh. Add the 1/2 cup rice and 1/2 cup water and cook till the rice is slightly cooked. Add the salt and pepper. Stir. Remove from heat and set aside.

In a large oven proof pan, 13x10 assemble the vegetables. Take one by one and fill with the mixture. When the pan is full and all the vegetables are stuffed, drizzle with 1/4 cup olive oil, salt and pepper, the remaining cup of the chopped tomatoes and a can of diced tomatoes. Add 1 can (14 oz) of water. Bake in the oven at 350 degrees for 2 hours, uncovered, till the vegetable are tender and slightly browned on top. Remove from the oven and serve. 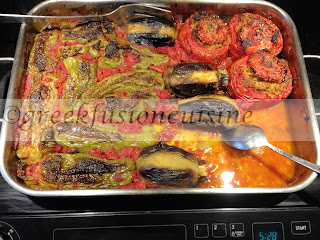 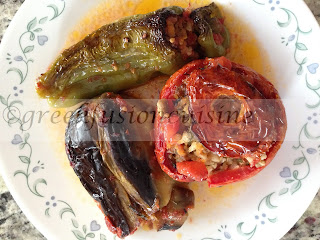 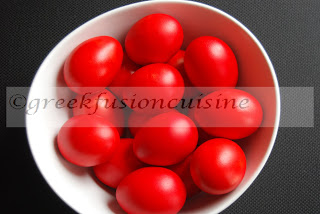 This year our Greek Easter was the same time as the Catholic. The holiday is already gone but we don’t stop wishing everyone Christos Anesti (Christ is Risen) and Hronia Polla (meaning = many years) till Holy Pentecost which occurs 50 days after Easter Sunday.

While it feels great when Greek Easter is the same time as the Catholic, it does have its ups and downs. The stores are busier, you can’t find everything you need, and the lines at the checkouts are atrocious. However, I can’t help but feel this exhilaration when our Easter is the same time as the Catholic. The Greek church is full of people during the Greek Holy Week, and especially on our Good Friday (we don’t call it Good Friday; in Greece, and in Greek our Good Friday is called Great and Holy Friday – but that’s for another post).

After we celebrate our Easter Sunday, by stuffing ourselves with lamb (a recipe post for another time), meatballs (link), tzatziki sauce (link), tsourekia and red colored egg, then we try to detox the following few days. In Greece, while life goes on the same way as before the holidays, the good wishes continue till Holy Pentecost. When you meet or call someone you know, or when you enter a store to buy something, you wish them Christos Anesti (Christ is Risen), and they respond with Alithos Anesti (He is truly Risen). Or with the most common wish Hronia Polla (many years).

There are a few holidays after Easter that people celebrate. The Sunday after Easter is the Sunday of Thomas which commemorates the appearance of Jesus to his disciples eight days after his resurrection. When Jesus first appeared to his disciples after His resurrection and said: “Peace be with you”, Thomas was not present and did not believe it. Eight days later, the Sunday after Easter, the disciples gathered again while Thomas was present. That’s when Jesus appeared once more and Thomas believed and said: “My Lord, my God”. Anyone who is named Thomas, or Tom, even the female version of Thomas which is Thomai (pronounced: Tho-ma-eé) celebrates his/her name day on this day. That’s when we wish them “Hronia Polla”.

The other holiday that is celebrated after Easter is St. George’s. It is on April 23rd but if it falls during our Greek Holy Week, the celebratory day is moved to Easter Monday. St. George was a Christian martyr, but he is also depicted in icons as the dragon slayer. Anyone named Georgios (the Greek name for George), George, Georgina, Georgia, will be celebrating their name day. Even though St. George’s day is not a public holiday in Greece, if it’s celebrated on Easter Monday, it’s considered a holiday. This year, St. George’s day falls on Sunday April 23rd, which is also the Sunday of Thomas. There will be many homes in Greece who will be celebrating.

Since my brother was named George, and later on my father in law, I always, in a way, felt St. George’s day as a holiday. I used to send them a card and in later years called them and wished them Hronia Polla.

While I was growing up, my mother made preparations for my brother’s name day. Relatives and friends would come and visit, to wish him Hronia Polla. On many occasions my mother ended up making tsourekia (link) and koulourakia (link) again, since we basically devoured them. Along with tsourekia and koulourakia she’d offer the chocolate sweets that you’d find at the local zaharoplasteio (za-ha-ro-pla-steéo)-sweet shops- that carry everything from chocolate sweets, to beautiful decorated cakes, ice cream, and anything you heart desires. I haven’t found a sweet shop here in the States that’s anything like the sweet shops in Greece.

The next big religious holiday is Holy Pentecost. This is a three day holiday in Greece. Holy Pentecost is celebrated each year on the 50th day after Easter Sunday. Pentecost comes from the Greek word Pentikosti (Pe-nti-ko-steé) which means 50. It’s the day the Holy Spirit appeared to the Apostles while they were gathered around in one room. After the appearance of the Holy Spirit, tongues of fire sat upon each of the Apostles thus giving them the ability to speak in different languages. There are many icons depicting this. And so it begins the teachings of the Gospel and Jesus work as we know it nowadays.

When Holy Pentecost is over, we stop wishing everyone Hronia Polla, or Christos Anesti. The Easter or Pascha (Pa-ska, as it is called in Greek) season is over.

The Adventures of a Shih Tzu named Nappy